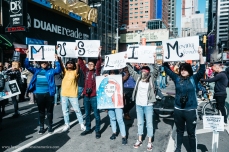 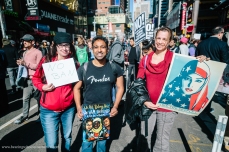 I’m not thinking about going anywhere.  Maybe this is surprising because of the already large increase in reported hate incidents since the election.  Maybe this is surprising because I am the child of a refugee from the Nazis who managed to escape just in time whose parents were not able to leave because they left it until it was just too late.  Despite all this and the dark reality we have arrived in and the previously unimaginable darkness ahead of us I am not thinking of leaving and these are the reasons why:

There may be a time to leave – My family should have run much sooner – But this is not it.

We stay because we have the example of the descendents of enslaved people who maintained their dignity as human beings through centuries of racial injustice and stood up and marched and bore witness to injustice and awoke the conscience of a nation.

We stay because they did this in the face of solid organized state repression, Hoover’s FBI, lynchings, bombings of churches and other acts of domestic terrorism and the original overwhelming indifference of the majority of white America.

We stay because of the those who travelled south and stood by them and withstood beatings, dogs and the threat of renewed McCarthyism.

If they could rise up and stare down what they faced then and bear witness to injustice then what we are being asked to do now and what we are facing ahead of us are small things.  We stay.